When you think about all the work that goes into nurturing your crops up to the point of harvest – from preparing the soil, selecting seeds, planting, and fertilizing to the countless hours spent monitoring the weather – it’s safe to say we spend most of our season prepping for the most fun (and shortest) part: harvest. If you’re experiencing rotor loss, each kernel outside the bin decreases the ROI of your labored preparation. Switch to KX7 concaves and stop accepting rotor loss as a part of the job. We visited two KX7 customers this June who are combatting rotor loss and getting better grain samples in wet conditions. Let’s take a closer look.

Our first stop was Harper Farms in Trenton, Tennessee. Owner Peyton Harper had first talked to Kondex about our KX7 concaves at the National Farm Machinery Show in Louisville, Kentucky this past February. At the time, Peyton was debating which new combines to purchase – red or green – but knew he’d be putting KX7s inside to overcome the past issues he’d had with losses, whitecaps, and damaged grain. He settled on three new Case 8250 combines with AFS Harvest Command systems, and purchased complete KX7 kits for each of these in April. When it came time to harvest his approximate 5,000 acres of winter wheat, we stopped by to ensure things were running smoothly. 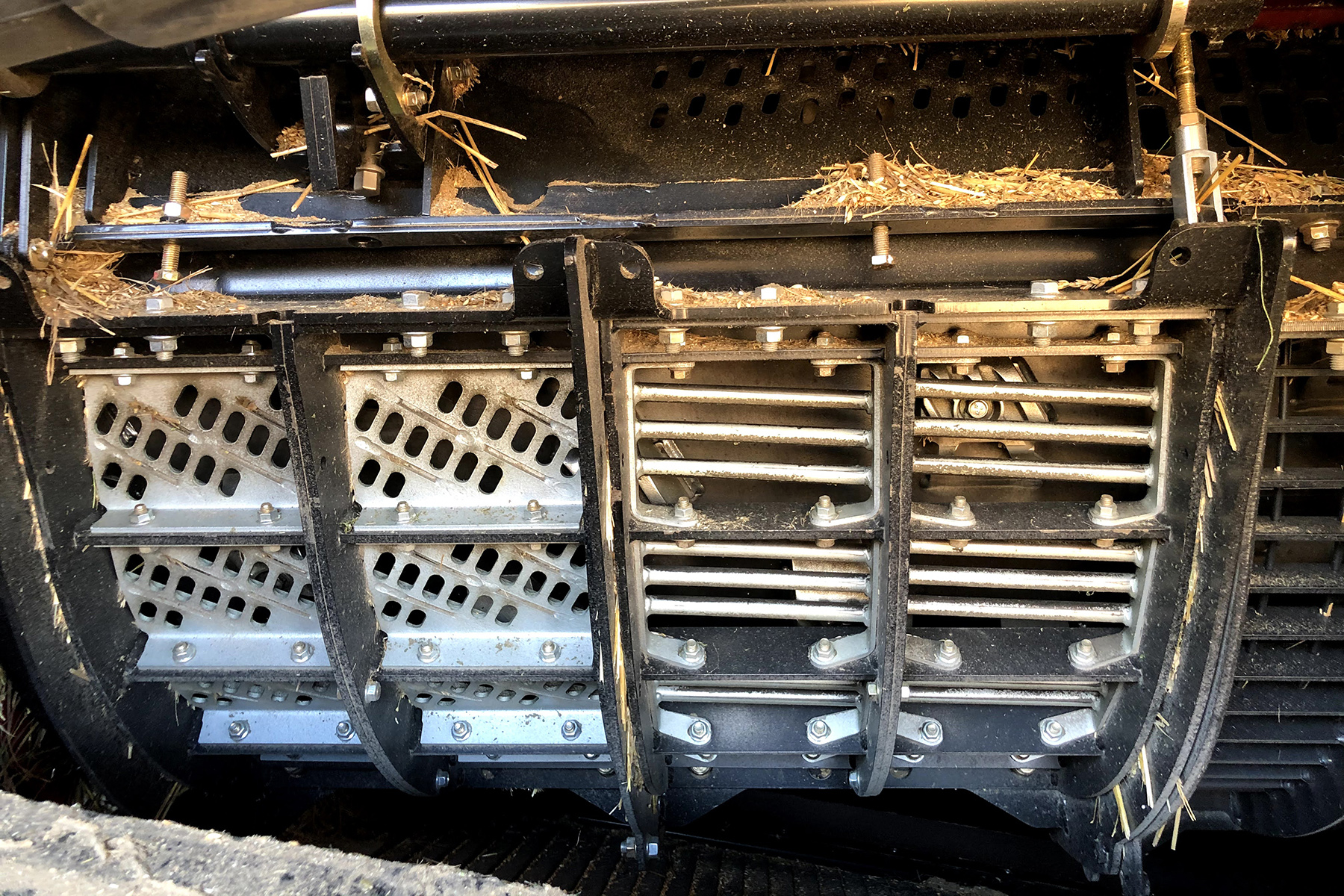 With some recent rain and a tropical storm that had recently crossed the state, grain moisture levels were approximately 14%, but stalks were wetter than typical. Since they were double cropping beans, there was no time for further natural drying (nor a guarantee that the weather would cooperate), so harvest of their 80 bushel/acre wheat began in mid-June. Traditionally, this moisture level can cause problems with the grain pressing to the stems and being carried out the back; however, this is not a big concern when using KX7 concaves. Its earlier threshing is very conducive to high moisture, as this allows for sooner separation, and the concave spacing being more open better allows for the grain to fall through.

To calculate rotor loss, we used ScherGain drop pans, which are magnetically mounted behind the combine to measure various checkpoints during harvest. These five-foot by one-foot collection bins capture material expelled from the back of the combine before the magnets are released for sample examination. Any lost kernels are sifted from the MOG (material other than grain), and losses are calculated using ScherGain’s measurement charts for header widths, crops, and grain captured. It’s a good idea to do drop pan testing periodically to calibrate your combine’s loss sensor. 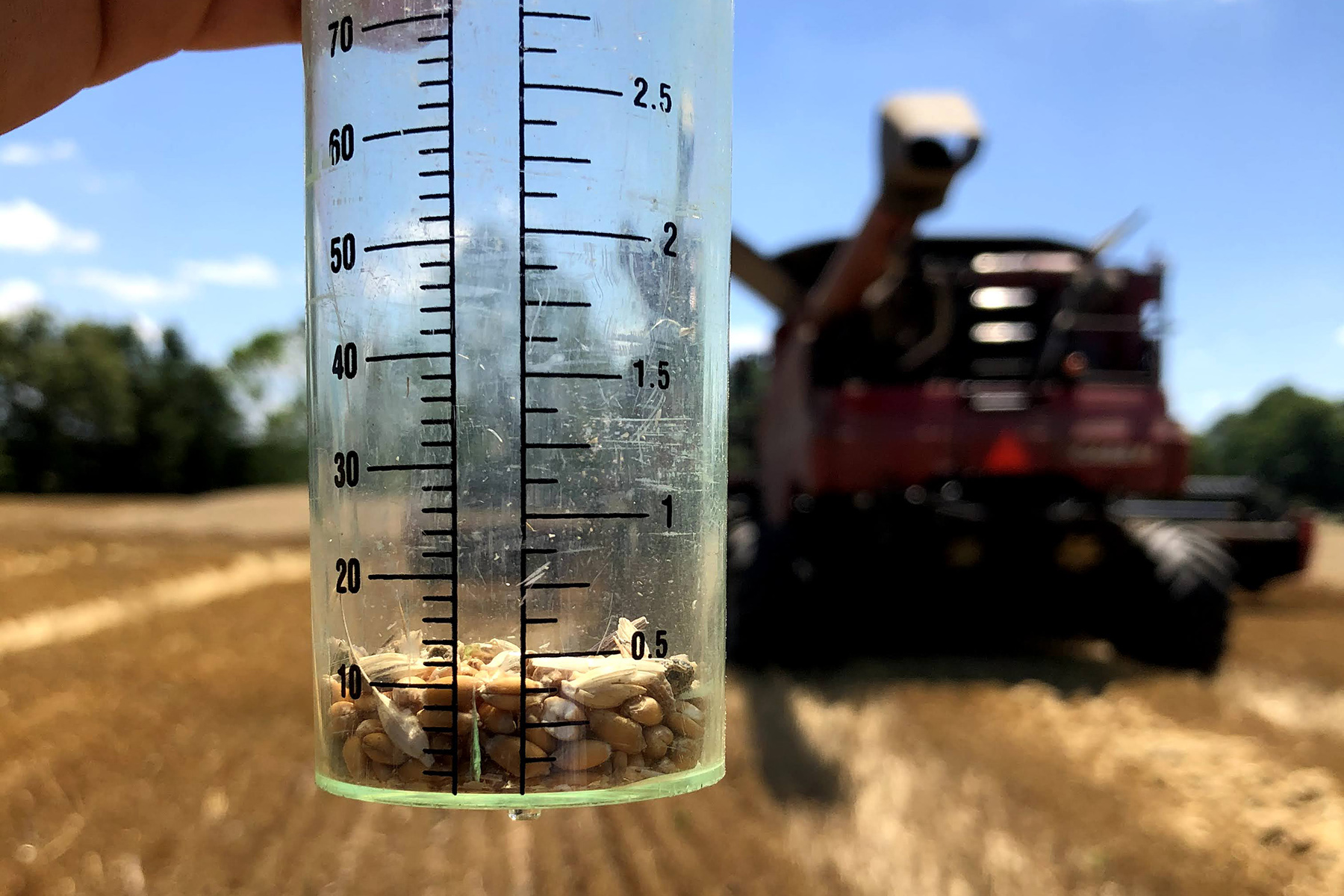 Rotor losses for Harper Farms’ 2020 wheat were well below normal at 0.3%! While the prior years’ numbers weren’t known, anecdotally, this was a big improvement. As for the grain quality goal Peyton set to accomplish with KX7, not only did he notice a vast improvement, but the elevator operator made a comment that it was the cleanest sample he’d seen in 25 years! 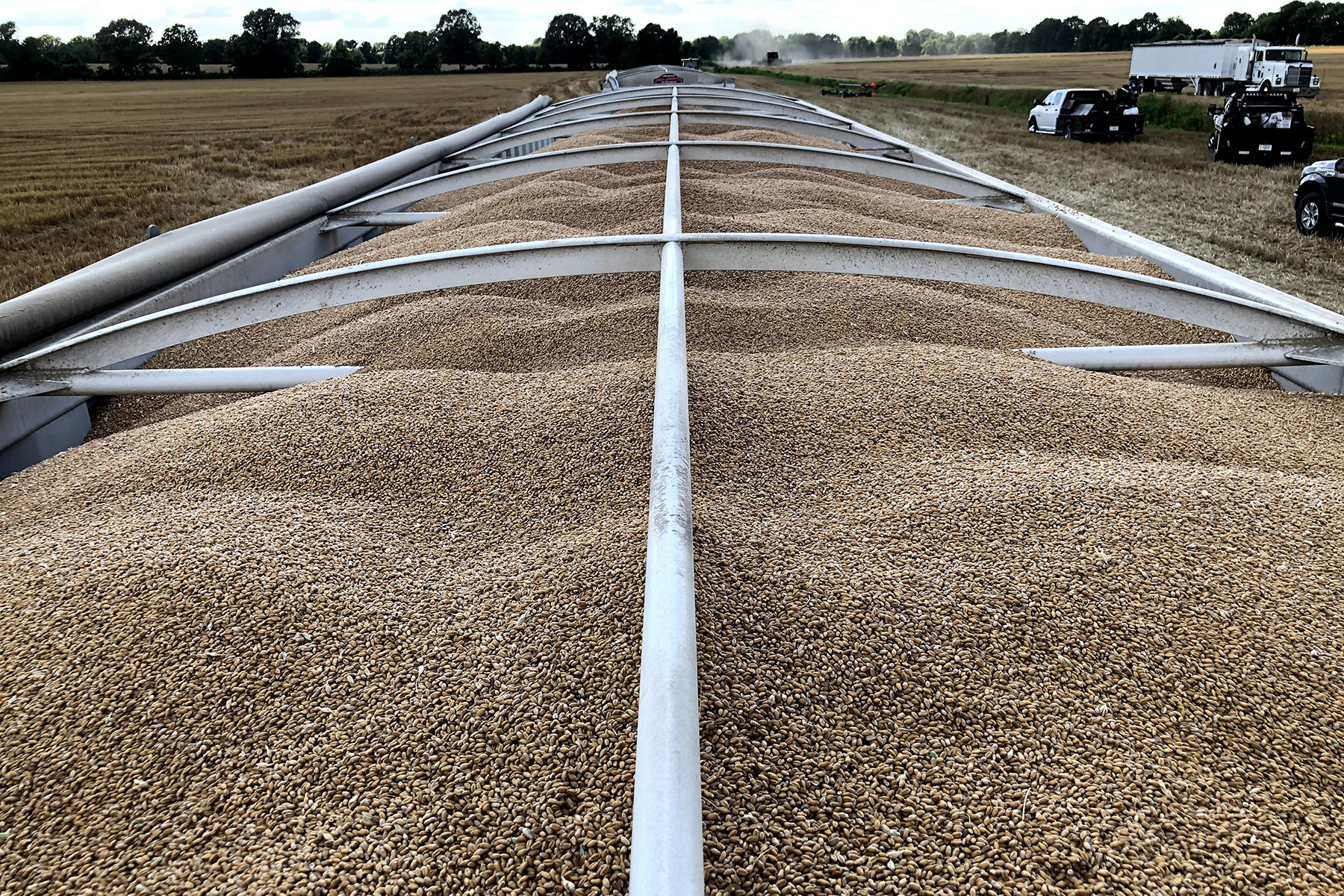 After the successes in Tennessee, our next stop was visiting old friends and fourth-year KX7 users Matt and Jerry Schenk at MJS Ag, LLC in Wadesville, Indiana. They too had upgraded their equipment. They’d previously run a John Deere 9670 and had recently rebuilt a used S670. 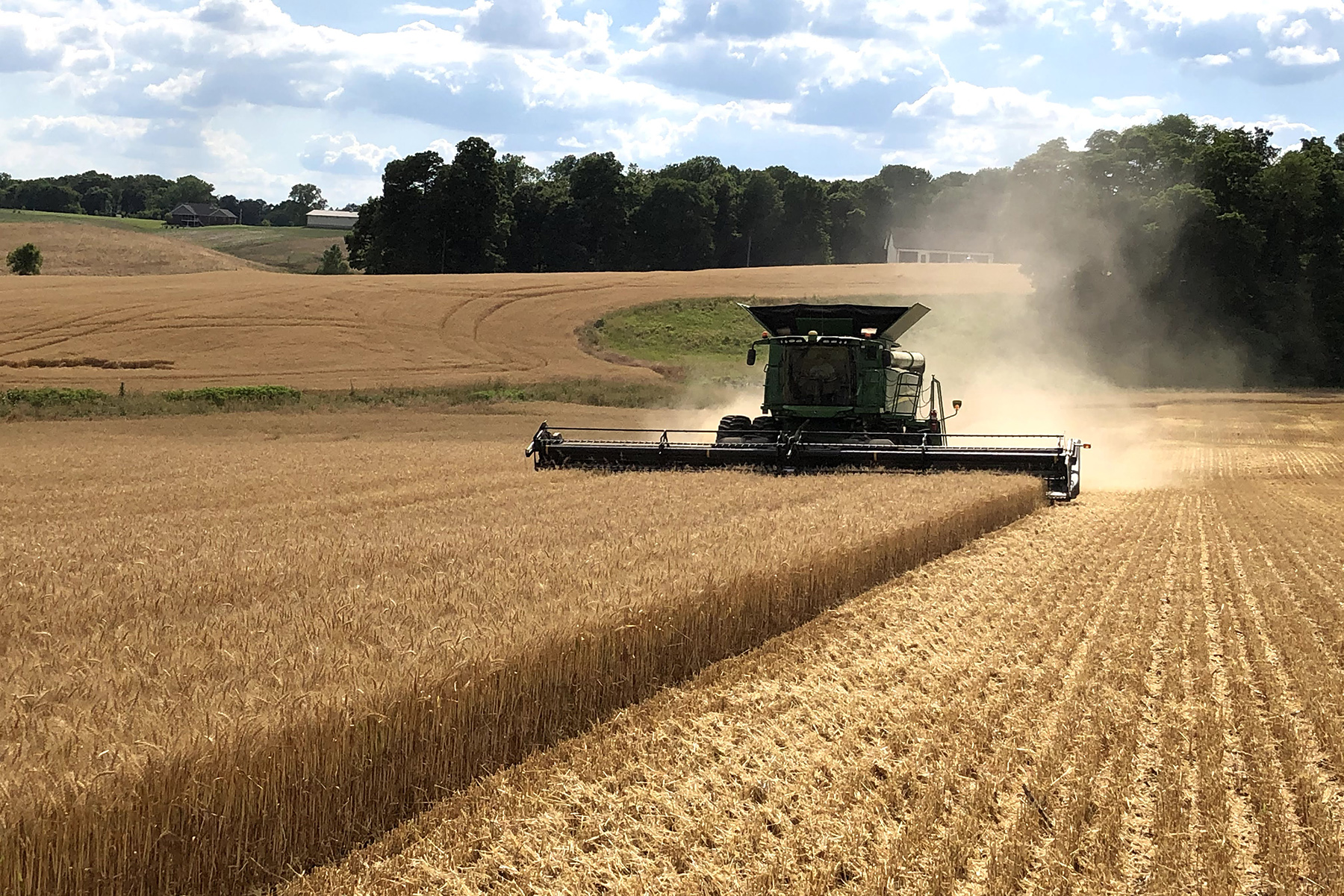 While their acres are a bit less than the Harper’s, they’re more aggressive in earlier, higher moisture harvesting. Their area typically sees a dry stretch from mid-June to August, so they prefer to get the wheat cut early enough to plant soybeans when there’s still moisture in the ground so it can sprout well. They then use dryers after harvest before taking it to the elevator. 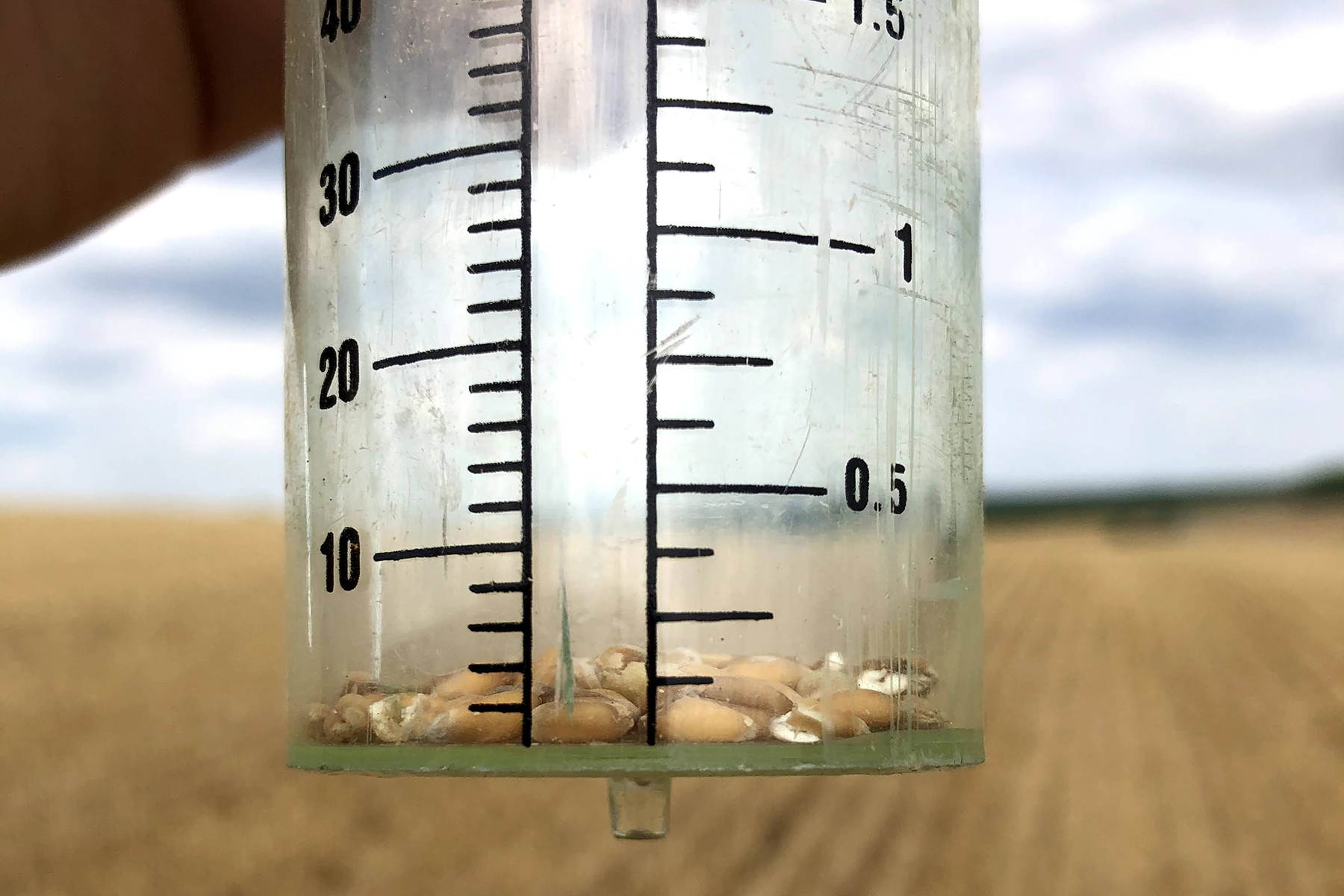 Running at about 3.3 to 3.5 mph in 16.5% moisture wheat, the Schenk’s measured rotor loss was 0.2% of the 80 – 85 bushel/acre yield. As self-proclaimed perfectionists, they believe they could have gotten even closer to zero had the straw condition not been so damp. 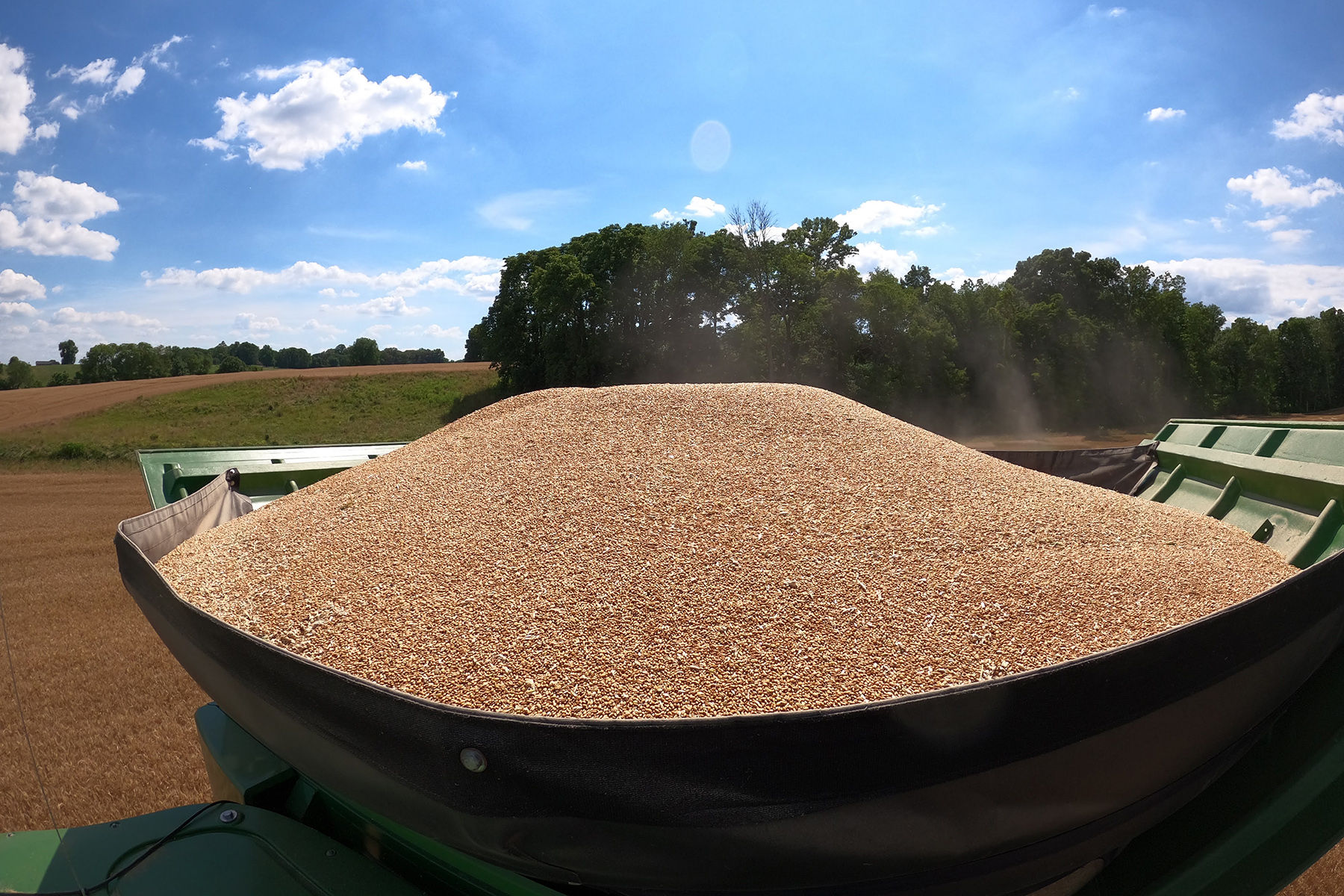 When you’re ready to regain your otherwise volunteer crops, give KX7 a try. Send us a note, we’d love to help you Take Control of Your Harvest!