Disc mower knives are used in mower conditioners to cut forage that will be dried and later gathered for cattle feed. There has been a long-standing debate between which knives are better: knives with a rolled cutting edge or the Kondex machined edge disc mower knives. Kondex participated in a recent study to answer this question.

As shown below, the rolled disc mower knife gains its cutting edge from the rolling process, while the machined disc mower knives start as blank steel and is machined to the specified sharpness. 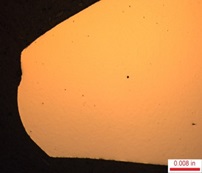 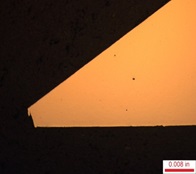 A common claim made by competing manufacturers is that the machined edge will not last as long as a rolled edge knife. They demonstrate their claim by striking one knife against the other, which can result in denting the machined edge. In looking at the metallurgical micrograph cross-sections of the two parts, this claim is quickly dismissed as a matter of edge thickness rather than toughness.

But the question remains: which knife lasts longer? We put it to the test — or rather tests. We ran 10 individual comparisons with a total of 160 knives (80 rolled edge knives and 80 machined edge knives).

Field testing was conducted over four months to compare disc mower knives with a machined cutting edge to those with a rolled cutting edge. The crop being cut was mainly hay and grass, and was growing in sandy soil. A pull-behind mower conditioner was used for testing, which was set up with one of each knife type on each of its eight discs. This allowed for a direct comparison in the exact same conditions. Each knife was coded, weighed before and after each series of 10 runs, and replaced with a new knife before each test. 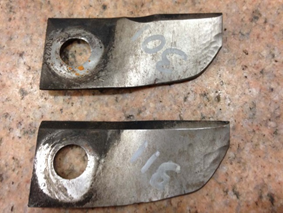 For your safety and protection, Kondex goes the extra mile to ensure the quality of these high-liability parts. Our disc mower knives undergo thorough examination and testing to ensure that only the highest quality components are released.

Our knives must pass both impact and bend tests before leaving our facility. The impact test directly simulates field usage: knives are mounted to the disc assembly and spun at a high speed before striking a raised stake. The bend test ensures the knives can withstand high amounts or force. Both procedures conform to ISO 5718 standards. Furthermore, Kondex disc mower knives are subject to metallurgical verification. All manufacturing lots must be approved by our highly qualified metallurgists through micrograph analysis prior to shipment.

Interested in seeing these tests or learning more about our manufacturing processes? Contact a Kondex representative today to schedule a visit.